The name of the religion is Islam, which comes from an Arabic root word meaning “peace” and “submission.” Islam teaches that one can only find peace in one’s life by submitting to Almighty God (Allah) in heart, soul and deed. The same Arabic root word gives us “Salaam alaykum,” (“Peace be with you”), the universal Muslim greeting.

Who is a Muslim?

Muslims believe that since Allah alone is the Creator, it is He alone that deserves our devout love and worship. Islam holds to a strict monotheism. Any worship and prayers directed at saints, prophets, other human beings or nature is considered idolatry. What do Muslims believe about God, prophets, the afterlife, etc.?

The basic beliefs of Muslims fall into six main categories,

which are known as the “Articles of Faith”

Faith In The
Unity Of God

Faith In Books
Of Revelation

Faith In
An Afterlife

The “Five Pillars” Of Islam

In Islam, faith and good works go together. A mere verbal declaration of faith is not enough, for belief in Allah makes obedience to Him a duty. The Muslim concept of worship is very broad. Muslims consider everything they do in life to be an act of worship, if it is done according to Allah’s guidance. There are also five formal acts of worship which help strengthen a Muslim’s faith and obedience. They are often called the “Five Pillars of Islam.” 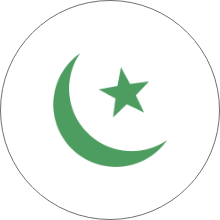 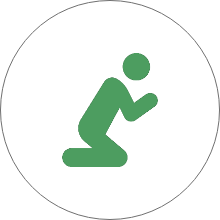 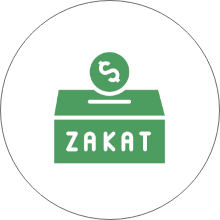 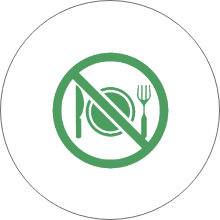 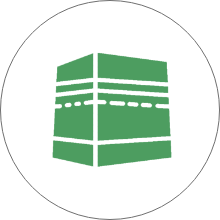 Daily Life as A Muslim

While often seen as a radical or extreme religion, Muslims consider Islam to be the middle road. Muslims do not live life with complete disregard for God or religious matters, but nor do they neglect the world to devote themselves solely to worship and prayer. Muslims strike a balance by fulfilling the obligations of and enjoying this life, while always mindful of their duties to Allah and to others.

To the Quranic word Zakah and the meaning it conveys, there is no equivalent in any other language as far as we know. It is not just a form of charity or alms-giving or tax or tithe. Nor is it simply an expression of kindness; it is all these combined and much more. It is not merely a deduction of a certain percentage from one’s property, but an abundant enrichment and spiritual investment. It is not simply a voluntary contribution to someone or some cause, nor a government tax that a shrewd clever person can get away with. Rather, it is a duty enjoined by God and undertaken by Muslims in the interest of society as a whole
The Quranic word Zakah not only includes charity, alms, tithe, kindness, official tax, voluntary contributions, etc., but it also combines with all these God-mindedness and spiritual as well as moral motives. That is why there can be no equivalent to the word Zakah because of the supreme originality of the Quran, the Divine Book of God.

The literal and simple meaning of Zakah is purity. The technical meaning of the word designates the annual amount in kind or coin which a Muslim with means must distribute among the rightful beneficiaries. But the religious and spiritual significance of Zakah is much deeper and livelier. So is its humanitarian and sociopolitical value.

The far-reaching effects of Zakah

Zakah purifies the property of the people with means and clears it from the shares which do not belong to it anymore, the shares which must be distributed among the due beneficiaries. When Zakah is payable, a certain percentage of the wealth should be distributed immediately in the right manner, because the owner no longer has moral or legal possession of that percentage. If he fails to do so, he is obviously retaining something which does not belong to him. This is corruption and plain usurpation from every point of view, moral and spiritual, legal and commercial. It means that the unlawfully retained percentage makes the whole lot impure and endangered. But, on the other hand, if the poor’s dividends are assorted and distributed among due beneficiaries, the remaining portions of the lot will be pure and decent. Pure capital and decent possessions are the first requisites of permanent prosperity and honest transactions.

I. Zakah does not only purify the property of the contributor but also purifies his heart from selfishness and greed for wealth. In return, it purifies the heart of the recipient from envy and jealousy, from hatred and uneasiness; and it fosters in his heart, instead, good will and warm wishes for the contributor. As a result, the society at large; will purify and free itself from class warfare and suspicion, from ill feelings and distrust, from corruption and disintegration, and from all such evils.

II. Zakah mitigates to a minimum the sufferings of the needy and poor members of society. It is a most comforting consolation to the less fortunate people, yet it is a loud appeal to everybody to roll up his sleeves and improve his lot. To the needy it means that it is by nature an emergency measure and that he should not depend on it completely but must do something for himself as well as for others. To the contributor it is a warm invitation to earn more so that he can benefit more. To all parties concerned, it is, directly as well as indirectly, an open treasure for spiritual investment that compensates abundantly. Zakah is a healthy form of internal security against selfish greed and social dissension, against the intrusion and penetration of subversive ideologies. It is an effective instrument in cultivating the spirit of social responsibility on the part of the contributor, and the feeling of security and belonging on the part of the recipient.

III. Zakah is a vivid manifestation of the spiritual and humanitarian spirit of responsive interactions between the individual and society. It is a sound illustration of the fact that though Islam does not hinder private enterprise or condemn private possessions, yet it does not tolerate selfish and greedy Capitalism. It is an expression of the general philosophy of Islam which adopts a moderate and middle but positive and effective course between the Individual and the Society, between the Citizen and the State, between Capitalism and Socialism, between Materialism and Spirituality.

(From: Islam in Focus by Hammudah Abdalati (American Trust Publications)